Arthur Boyd – An artist with a conscience

Looking back at Australian history, it’s humbling to know that an individual like artist Arthur Boyd existed. He was one of those unique people who fought to expose the social injustices within our society and through his art, built a strong platform to share his views. In the late 20th century he was one of only a couple of painters portraying Aboriginal Australians, and his work was a reflection of his strong social conscience.

One of my favourite works by Arthur Boyd is ‘Goat Girl’, a painting that came to fruition after he visited Central Australia. He was shocked to see the living conditions of the Aboriginal people living in the area and captured this raw emotion in this work of art. 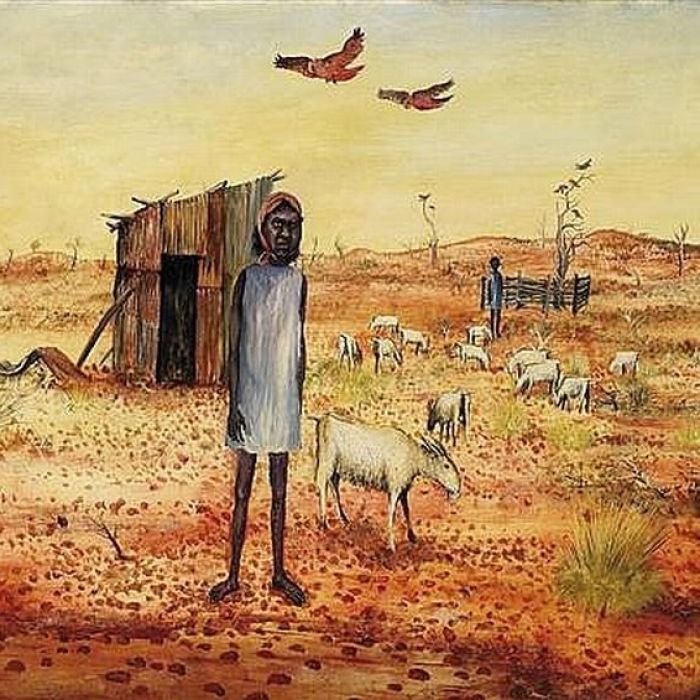 Many of Boyd’s paintings reflect his pacifist views on life and depict figures like ‘Goat Girl’ in the Australian bush, shrouded in an aura of injustice, alienation or remoteness. It’s not the type of art that you can turn away from; instead, you’ll be intrigued to unravel the true narrative hidden on the canvas. A lot of his stories convey a need for tolerance and reconciliation and promote the need to unite cultures.

After painting ‘Goat Girl’, Boyd painted ‘Dry Creek Bed’, and this marked the time that he altered his style and went on to paint the famous ‘The bride’ series. This was a collection of paintings portraying a half-caste and his bride, which portrayed the character as an outsider and social outcast.

So where did this pacifism come from? You could say he was influenced by many things in his life, his time in the inner city suburbs of Melbourne and his contact with European refugees, writers he met during his studies, his conscription to the army in 1941 (although he never completed active duty) and anti war views, or his time as a member of the ‘Angry Penguins’, an Australian literary and artistic avant-garde movement of the 1940s.

Arthur Boyd came from a strong line of artists. From his grandparents to his siblings, he was one of many in the strong Boyd artistic dynasty of painters, sculptors, potters and writers. His sister married artists John Perceval and Sidney Nolan, and Arthur himself married a painter, Yvonne Boyd. Surrounded by this calibre of artists you can see why he became such a respected painter in Australia.

In true romantic style, Arthur Boyd met his wife Yvonne in a life drawing class and they married in 1942. She shared his passion for painting as well as his strong social views and was a hugely talented artist herself. She won many awards and prizes, but she sacrificed her own potential to support her husband and his career.

After many years of life in the realms of the Australian art scene, Arthur, along with his wife Yvonne, left a priceless gift to the Australian public, their property ‘Bundanon’ near Nowra in NSW. Arthur wanted to share with the Australian people the 1100-hectare property that inspired him so much.

He believed ‘you can’t own a landscape’ and donated the property in 1993. It’s now looked after by the Bundanon Trust and is an inspiring space that is the home to artist residencies, supports research and education and is open to the public for visits. This unique Australian asset embraces environmental management and fosters its links with the surrounding Aboriginal communities.

Although both Arthur and Yvonne Boyd have passed away, their spirit lives on through the hundreds of Australian artists Bundanon touches and this wonderful legacy they have left for our country.