If you’ve read my novel, Wild Lands, you’re familiar with Bronzewing, one of the lead characters. He’s a young white man, raised in an Aboriginal community, schooled by an early settler family. He was a man between two worlds.

In Alice Springs in the mid 1900s, Aboriginal artist Albert Namatjira experienced this same disjuncture between two worlds. He was born ‘ELEA’ in 1902, and at the age of 3 he was baptised Albert.  He grew up in the Hermannsburg Mission with his parents who committed themselves to the Lutheran church.

For the greater part, Albert Namatjira had a western-style upbringing, but at the age of 13 he returned to the Australian outback and the Arrernte community, completing his right of passage. It was a walkabout that lasted 6 months. This traditional custom serves as an initiation into manhood, and is very important in the life of Aboriginal males. 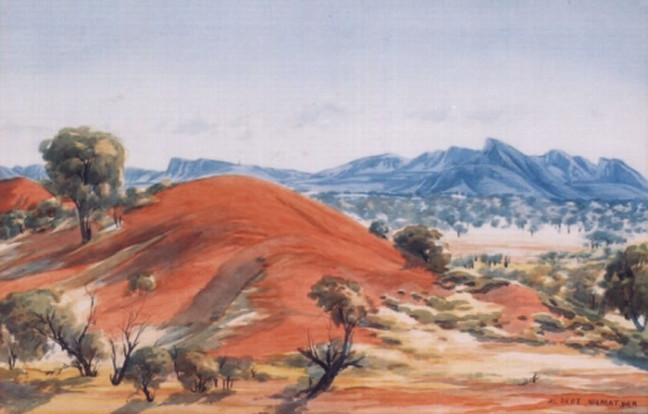 After his initiation, Albert returned to the mission, but went on walkabouts frequently over the next 5 years. Albert Namatjira had dabbled in art in his early years, and sketched the moods of the outback, taking inspiration from the stockmen and cattle yards that surrounded him. Embracing his traditional indigenous background, he also made boomerangs and woomeras for the mission he lived in.

It was in his late 20s that Albert’s world would change. The breathtaking scenery of the Northern Territory attracted many famous landscape artists, and in 1934 John Gardner and Rex Battarbee held an exhibition for an Aboriginal Audience in Hermannsburg.

On a returning trip, Rex Battarbee gave Albert 2 months of painting tuition in exchange for his services as a cameleer and afterwards included Albert’s artwork in his personal exhibition in Adelaide. Albert Namatjira was inspired, not only by the idea of selling his paintings for financial gain, but by the opportunity that arose to paint the land he felt such a deep connection with.

Albert continued to paint, his pastor helping him by supplying paper and watercolour paints to pursue his passion. He went on to have many successful exhibitions and in 1938 his first show sold out in Melbourne. Albert Namatjira grew to become a household name in Australia’s art scene.

Although it’s hard to pick just one, my absolute favourite Albert Namatjira painting is ‘Alice Springs Country’, from 1955. His portrayal of the Australian outback is touching. A spectacular combination of traditional European watercolour, merged with the insight of someone who has walked about the Australian bush and has an intense knowledge of the traditional use and sacred relationship his people have with the land beneath their feet.

Although Albert Namatjira was a renowned artist, he lived during a time when the divide in rights between white Australians and Aboriginal Australians was as vast as the land they lived upon.

Due to his success he met scores of influential people from around the world, including Queen Elizabeth II and The Duke of Edenborough. However, despite this fame, he was still controlled by the strict laws that surrounded members of the Aboriginal Community. He had dreams of owning his own cattle station, a legacy he could pass on to his children after he passed, yet he was denied this right and prohibited from owning his own property.

These rights allowed Albert and his wife to buy alcohol, a privilege Aboriginal people were not allowed at this time. In 1958 tragically, a woman in his camp was killed after a drunken fight and Albert Namatjira was found guilty of breaking prohibition laws. He spent 2 months in separation from his settlement and fell ill during that time. Not long after, in 1958 he died of heart failure, and many contributed it to the experiences that unfolded associated with his arrest.

It was a sad ending to what was an interesting life that shaped this talented artist’s swift rise to fame. His art allowed those that hadn’t experienced the outback to see it through his eyes, capturing the vibrancy and rich tapestry of colours that represent rural Australia.