Frederick McCubbin takes us along the Wallaby track.

I always admire artists who capture the true essence of the Australian outback, those who portray it in an honest and raw fashion. Frederick McCubbin is one such artist. He started painting the suburbs of inner Melbourne, but finished with his art adorning galleries across the world. His mesmerising interpretations of the Australian bush reflect the courage and heroic nature of the people who lived in rural Australia during the 1800s, and early 1900s. His paintings captured their emotions, their struggle to adjust to life in the harsh Australian outback; a transition I imagine was so difficult for many European migrants at the time. 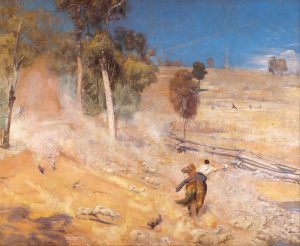 However, Frederick McCubbin was not only a painter and prominent figure in the Australian landscape art scene, he was an inspirational mentor to many up-and-coming Australian artists in Victoria. It’s one thing to possess the talent to paint; quite another to pass on these skills to others. Frederick was a founding member of the Heidelberg School of Artists, and he imparted his own passion for the Australian landscape to European artists who were new to the land. The geography was alien to many European artists who migrated to this dry, harsh country of ours and they struggled to see the beauty within the rawness of rural Australia.

Frederick put his hand to many professions before he could solely dedicate himself to painting. The third of eight children, he left school at the age of 14, to work as a solicitor’s clerk. Although, his true passion was always on his mind. He was fired when he was caught practicing his art in the office when nobody was around. 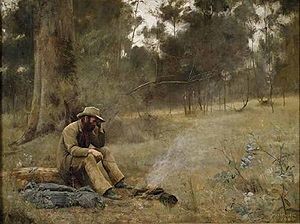 He was sent to work at his fathers bakery business, delivering bread, then later, he started work as an apprentice coach painter, not quite the painting I imagine he had in mind at the time. He attended art classes in the evenings, studying at the National Gallery of Victorias School of Design. This is where he became friends with many prominent figures in the art world, including Tom Roberts (Top left), another famous Australian landscape artist. He studied at the School of Painting, at the National Gallery of Victoria, under one of Australias most prominent colonial landscape painters, Eugene von Guerard, who was no doubt a great influence on Frederickss own work.

It wasnt until the mid 1880s that he began painting the Australian bush, something he would become famous for, and the part of his collection that I certainly connect with the most. 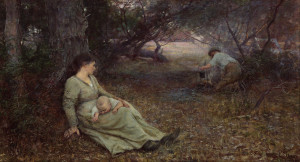 Bush Idyll and The Pioneer are a couple of his most recognised paintings, although, On the Wallaby Track (left) is my personal favourite. It was painted in Brighton in 1896, close to his home, and features his wife Annie, his brother-in-law and his son John as the models. If youre not familiar with the term On the Wallaby Track, it was used to describe the bush men, or swagmen who moved from place to place looking for work. I think this painting captures the vulnerability and hardship that was the reality for many early settlers in Australia at that time, and I believe its an unbelievable skill to be able to convey such emotion and humility in an artwork such as this.

Throughout his life Frederick McCubbin lived in Blackburn, Brighton and South Yarra, but his property in Mount Macedon in Victoria was the most memorable. Still standing today, a survivor of the Ash Wednesday fires that tore across Victoria, Fontainebleau is set upon 7 hectares and inspired many of his famous bush paintings, including The Pioneer. Its said that this residence was often packed to the brim with aspiring artists that he mentored, including famous painters Charles Condor and Arthur Streeton. How I would have loved to have been a fly on the wall during those gatherings.